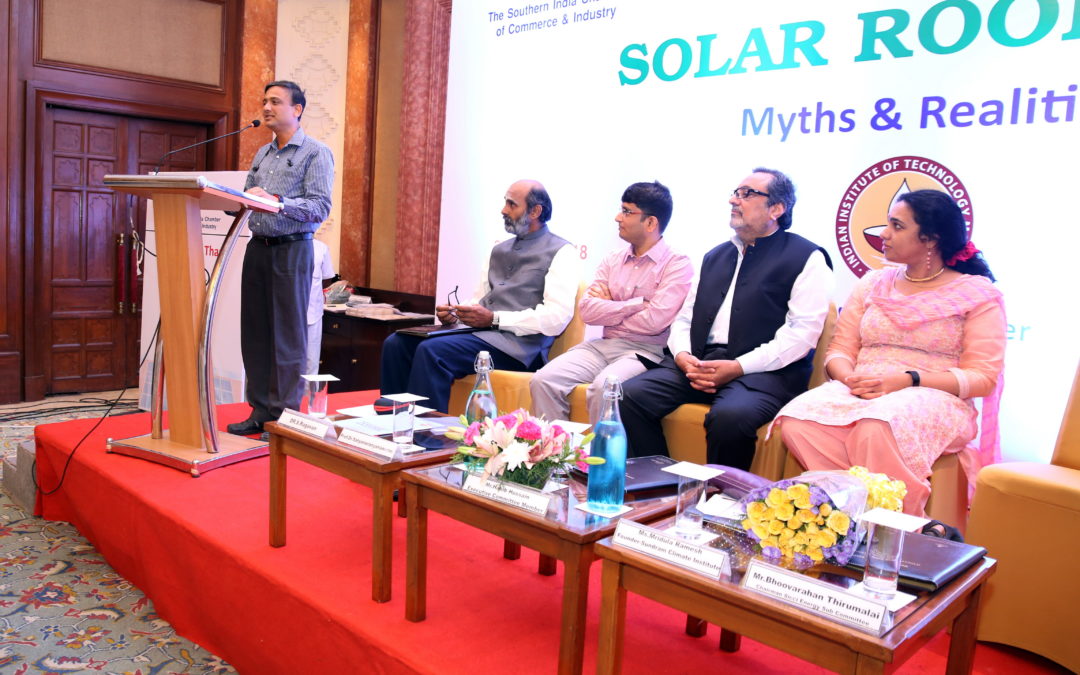 Solar Rooftop – Myths vs Reality was the theme for this edition of Footprints conducted on 29 June 2018 at WelcomHotel in Chennai. Sticking to Footprints’ legacy of being a platform for sharing end-user experiences, this edition also featured participants and speakers from various sectors of the industry, with each organisation bringing in something to the table with regard to energy utilisation.

The opening remarks were given by Mr. Bhoovarahan Thirumalai, Chairman, Energy Committee, SICCI, highlighting the importance of footprints and the need for industries to go for greener energy solutions for their manufacturing plants and at the same time the need to provide low costs energy solutions.

The event was inaugurated by the Chief Guest, Ms. Mridula Ramesh, who gave a brilliant talk on the pertinent problem of Solar Energy utilisation, and its feasibility for industries. Ms. Mridula stared out her speech with a reminder of the issue of global warming and its impact on the global energy scenario. While India is a significant emitter of greenhouse gases, there is the larger problem of so-called developed countries emitting gases in disproportionately higher rates – an issue that has to be addressed.

She also spoke on the need to look for alternatives source of energy – such as Solar Thermal which although are relatively unpopular are ideal for certain applications. 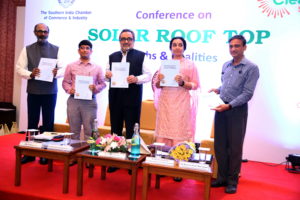 The event also featured a white paper released on the topic of Sustainability and Security in Industrial Energy Use: Hits and Misses on Solar Energy Integration by Prof Satyanarayan Seshadri, IIT- Madras. Prof Satya emphasized on the need to for the most ideal source of energy that would minimise the loss of energy.

The end user experiences were shared by Mahindra & Mahindra Limited and TVS Motors.

Mahindra had installed a 563 kW Solar PV in the Car parking area – and shared his experiences when installing the system.

This reduced their reliance on the grid and reduce their costs significantly. The finance model they used for the installation is based on an ESCO model with the billing being done for the energy delivered to the plant.

TVS shared their experience of installing a 225 kW Solar Thermal system for heating their Diesel Generator heads for quick start during cold conditions. The system’s objective was to reduce the fuel energy costs incurred for heating. TVS turned towards Aspiration Energy for alternative energy sources for their heating needs and deciding on using Solar Thermal systems. They had a look into the working of Solar Thermal systems by a live case from the installation in Harita Seatings in Hosur. The challenges faced during the installation were also shared. The solar thermal has since been monitored constantly and has been proven to save around 60 percent of the energy costs. With this, the TVS motors have been able to reduce massive amounts of carbon emissions as well.

But both the talks had a common theme of complexity involved when going green but needing to look at economics on installing the system.

The event also witnessed a roundtable discussion that saw interactions among the participants and the speakers.

In the end, one thing was sure – that everyone had taken back something from the event – for some it was new networking opportunities, and for some, it was great ideas that they could take back to their organisations to implement to yet again share a story to the world.