Our energy system is extraordinarily carbon-intensive and highly polluting.

In 2013, only 3% of India’s primary energy demand (both electricity and thermal energy) was met by non-carbon sources (predominantly nuclear and renewables that do not include biomass) (Source: International Energy Agency).

Fossil fuels account for 73% of the total source of energy, and biomass accounts for 24%. While biomass is considered a renewable energy source, it is still carbon-based and a polluting source.

It goes without saying that unless the energy sources are decarbonized, there is no way for India to grow in a clean and greenway. It is true not only for India but also for the entire world. Countries across the globe are launching new initiatives to tackle global climate change, reducing pollution and improving quality of life by deploying technologies that can decarbonize energy.

One very specific and highly visible example is the Coal to Electricity program launched by the Chinese central and local governments to combat the high levels of air pollution and haze in China, especially Beijing, during winters. In December 2015, Beijing declared its first Air Quality Red Alert, as a result of the elevated smog within the city, and shut down schools and some industrial areas as a result of the air pollution levels. Widespread coal combustion for providing heat during winters is a major factor attributed to the high levels of air pollution during winter in Beijing. (New Delhi faces a similar problem, and in December 2016, Telegraph newspaper ran a story titled “ Pollution in Delhi hits new heights as tourists take smog selfies”). Under the Coal to Electricity program, the government mandated the replacement of coal-fired boilers by electrical heating devices like electric resistance-based heaters and Heat Pumps. The government gave about 90% subsidy on the capital equipment for the replacement of coal-based heating devices. According to the China Heat Pump Alliance, around 161,000 Heat Pumps were installed in 2016 in Beijing under the “Coal to Electricity” Programme and the Beijing government gave a subsidy of 5 Billion RMB for these Heat Pumps. This and the Chinese government’s other programs are expected to reduce localized pollution due to decarbonization in cities like Beijing.

While China’s decarbonization programs are implemented out of immediate needs, Europe, especially Germany, has been taking more proactive policy approaches. For example, Germany, as part of its Energiewende, has a national goal to increase the % of renewable heat to 14% by 2020. Towards that, “from January 1, 2016—construction of new buildings will only be permitted if they use energy generated from renewable sources for space and water heating. This includes the use of solar, solar thermal, biomass, efficient heat pumps, etc. Oil burners are completely banned as a means of heating new buildings.”

More recently, during the last week of June 2017, several stakeholders in Europe come together to “launch two campaigns committed to ushering renewable and low-carbon energy to the forefront of Europe’s power landscape”. Both the campaigns – the Electrification Alliance and Make Power Clean – target the decarbonization of energy using renewable(solar/wind) energy generation(electricity) and promotion of renewable heat technologies like Heat Pumps and Solar Thermal(for heating requirements). According to the proponents of these initiatives, 30% of power in Europe comes from renewables, and this share is expected to touch 50% in a decade.

As mentioned earlier, in India, energy is almost entirely carbon-based, across every sector. This is especially true in the case of the industry sector. 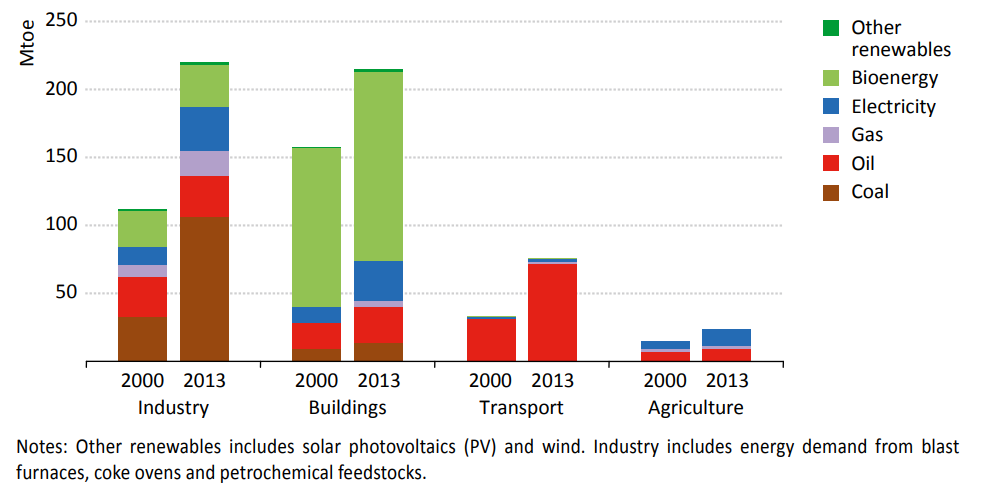 Energy demand by fuel in selected end-use sectors in India

The government of India has set ambitious targets for renewable energy – 100 GW Solar PV and 75 GW Wind installed capacity by 2022. However, more needs to be done to decarbonize the energy systems faster. That includes replacing fossil fuels with electricity generated using renewable sources, and by extracting and using renewable heat using technologies like Heat Pumps and Solar Thermal systems.

Both the ambient heat extraction technologies – Heat Pumps and Solar Thermal systems – have been around for a long time, and are proven and mature from a technology perspective. (Details about how these technologies work can be found here(Heat Pumps) and here(Solar Thermal)).

In industrial applications, Heat Pumps and Solar Thermal systems can be highly cost-effective with payback periods as low as 1 year depending on the capacity utilization. These applications have also helped reduce localized pollution for several of Aspiration Energy’s customers, and have led to a significant reduction in carbon footprint by decarbonizing the Heat sources. For example, in the case of one of our customers, we were able to demonstrate more than 50% savings in energy cost and about 50% reduction in CO2 emissions per year by switching to a Heat Pump, as below. 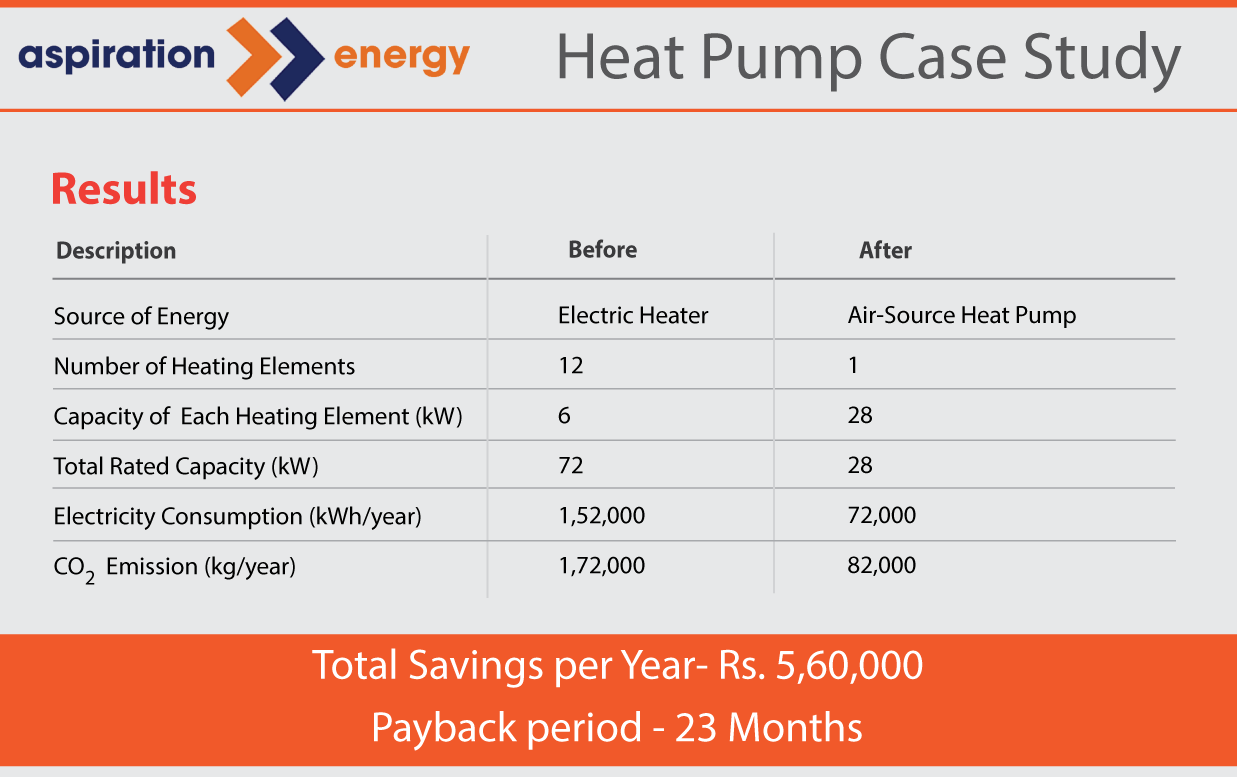 Similarly, one of our other customers was able to reduce about 20-25 tonnes of LPG per year by installing a 360 kW online rooftop solar thermal system. (Download the case study here).

Decarbonization of energy systems is critical for the environment and will have a significant positive bottom-line impact. Decarbonization of electricity by installing Solar and Wind power projects is well known, and it is now time to place more emphasis on decarbonizing Heat by deploying renewable thermal technologies like Heat Pumps and Solar Thermal systems. The climb is steep but would be well worth it.